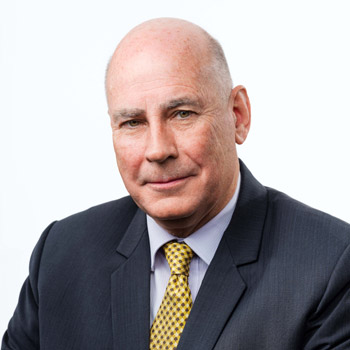 John Abernethy
Director
0 0
Now the dust has settled on the budget and political spin has run dry, it is timely to review the forecasts and charts presented in the budget papers by Treasury.
This department houses the economic intellectuals of Australia and so their analysis, reflections and forecasts, are well worth reflecting upon.
Let’s start with our first budget chart that compares reported GDP growth (outcomes) for the June half for major advanced economies against the reported levels of COVID19 cases. The left side of the chart seems to show a direct correlation in economic decline to the incidence (cases per million) of COVID19. However, the right side shows a more uncorrelated relationship. Without delving too deeply into the relationship it seems that a massive or powerful fiscal response (budget deficit expenditure) was needed to offset the economic downdraft caused by the virus. More so if the virus spread was high. 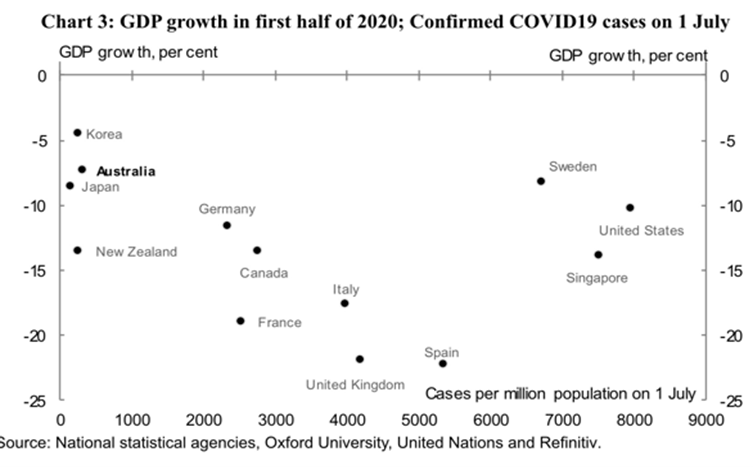 The ability of a country to draw upon debt as it grows its fiscal deficit to support a virus depressed economy is very much affected by its opening debt position, the stability of its currency, the international support for its bond issuance and its ability to undertake QE.
The next chart shows that Australia entered this crisis in a very strong debt position (as measured against GDP). We rated very highly against our peers and still do in spite of the projected $400 billion in deficits forecast from FY20 to FY23. As we will see later, international demand for Australian bonds was high and even before QE was proposed by the RBA.

The above chart showed that total “Advanced Economy” debt was stable as a percentage to GDP in the 5 years prior to this crisis. That essentially meant that during this period, debt grew at about the same rate as underlying GDP. It also meant that major economies struggled to balance their fiscal budgets – even after five years had passed from the GFC.
The next chart shows the trajectory of world economic recovery. The forecast for the world economy to recapture FY19 GDP by the middle of FY22 is very similar to Teasury’s forecast for Australia. Our view is that Australia will recapture its previous GDP level well before our advanced peers whom seem to be moving into a significant second wave of the virus as they enter the northern winter.

The next table also explains that recovery (back to previous economic growth levels) is starkly different in the developing world compared to the developed world. Whilst China did not record negative overall growth in FY20, it is forecast to rocket in FY21 and that is very positive for Australia’s bulk export companies. India is forecast to recapture its economic losses, mainly felt over the last six months, in the six months to June 2021.

Over the same forecast period, the recoveries projected for the developed world is much more muted. About one third of world economic growth in FY21 will come from China (mainly) and India. The recoveries forecast across Europe and the US will be slowed by a second wave of the virus and the growing view that near zero or negative interest rates actually slow growth (and therefore recovery).
The next table focuses on Treasury’s forecasts for the Australian economy. It is interesting to note the forecast (and belief) that Australia did not suffer a annual decline in growth in FY20. The forecast suggests that unemployment will average 7.25% in FY21 (which is above current reported levels) and that wages growth will be below inflation. If wages grow at a slower rate than inflation then it requires income tax cuts (which have now been legislated) to bolster real wages and stimulate consumption.

The projected cumulative deficits of the Commonwealth from FY20 through to FY24 are forecast to be $480 billion. Further the budget deficit in FY24 is still forecast to be 3% of GDP.
When comparing the above table to the one below we can discern that it was the fiscal stimulation (FY20) that held the Australian economy in a positive growth outcome and it will be the massive deficits of FY21 and FY22 that will push the economy into both economic growth and sustainable recovery.

The chart below shows the downturn in cash (tax) collections that flows from Australia’s sharp economic downturn. It is worth remembering that the Commonwealth historically set its budget on the assumption of collecting about 24% of GDP. It also presumed that expenditure approximated 24% of GDP to achieve a balanced budget. Australia was achieving this outcome for tax collections 15 years ago but has struggled since. Late in the Hoaward/Costello period the Commonweath had reduced debt to negligible levels by a combination of fiscal prudence and the sale of significant public assets. At that point expenditure was well under control with no drawings required for bond interest payments. This led to the commencement of the policy to reduce the size of the Budget tax collections to below 23% of GDP. Ultimately that target was exacerbated by the GFC as tax collections naturally declined.

The Mid-Year Economic Forecast (MYEFO December 2019) set the trajectory (see above) for the resetting of tax collections back to the 24% of GDP by 2030. However, that plan is now curtailed and the current trajectory suggests it may be 2035 before this occurs – if at all. Further, with budget expenditures sitting between 25% and 26% of GDP, the budget is not forecast to balance during the next decade.
The decline in tax revenue caused by the recession has been increased by the bring forward of tax cuts (see dashed line – above). The Government has now adjusted its fiscal economic policy by resetting the budget target for the next decade and following the current recession. No longer is a balanced budget or a small surplus the desired outcome. Rather deficits measured to GDP are targeted to be below growth in GDP so that debt to GDP declines over the next decade.

The outcome of zero-bound interest rates is that Treasury forecasts that Commonwealth interest paid on bond debt will be stable in the face of ballooning debt. The following table forecasts that net interest payments will approximate 0.7% of GDP and therefore consume just 3% of budget outlays over coming years. This outcome occurs in spite of net debt growing from 19% (FY19) to 44% of GDP (FY23).

As the level of Australia’s bond debt grows, the owners of this debt will be split between non-resident buyers, resident buyers and increasingly the RBA (through QE programs). It is worth noting that the RBA does not intend to bid for bonds in primary auctions, but it will be active in the secondary market and will give guidance as to where it is targeting bond yields to be.
The chart below shows the ownership profile of bonds and the ownership trend prior to the COIVID crisis. As FY20 unfolded foreign owners increased their bond holdings, even as the RBA dramatically cut cash rates and guided 3 year bonds to 0.25%. The percentage reduction in foreign bond holdings is primarily due to the onset of QE as the RBA picked up $50 billion in bonds. 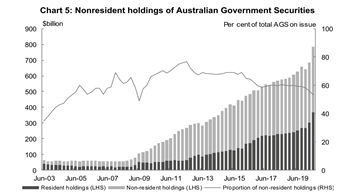 The ongoing demand for Australian bonds by non-resident investors will be a crucial determinant for the level of QE support required by the RBA. To some extent this international demand will be generated by the bond yield differential of Australian bonds to international bonds. There is an abundance of investment capital, created by worldwide QE and yield is being soaked up across the world and with no concern for either the risk of inflation or default. 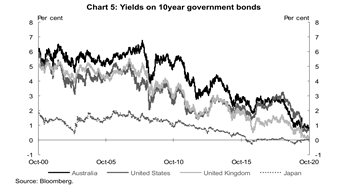 The chart above shows that buyers (and owners) of bonds have had a great return as yields dramatically compressed with Central banks across the world increasing QE and targeting zero cash rates. The demand for Australian bonds – which are AAA rated – has been strong and far outweighed the level of supply.
As bond yields decline then their market value increases. The next table shows that if the Commonwealth attempted to buy back its issued bonds then it would pay $100 billion more than the proceeds on issuance. The major part of that capital gain to holders has occurred over the last 4 years with bond returns at historic highs. From this point the outlook, with yields at 0.25%, is problematic and the returns likely on equities and property will be far superior.

So what does this mean for asset allocation?

In the budget, the Commonwealth reviewed the Future Fund because this is regarded as an asset of the public because it was created to meet the defined benefit Commonwealth pension liabilities. These liabilities currently exceed $200 billion, expected to grow to $250 billion by FY26 and currently exceed the value of the Future Fund (approximately $160 billion) by $40 billion.
The Future Fund is currently an accumulation fund because it pays no pensions to beneficiaries, with the first pension drawdown to be made in 2026 and the last at some point in 2050. Its target rate of return is 4% to 5% above CPI over the long term.
For SMSF investors it may be instructive to see as to how the Future Fund is currently structured to meet its aims. Further to see how it has been managed during the COIVID crisis.

The above table shows the focus on growth assets with a significant underweight to Australian equities. We suggest that this is caused by the large size of the Fund and with the best value in the Australian equity being in the mid-market and so too small for this Fund to access.
The other features are a non-existent weighting to bonds, a low exposure to direct property and a high weighting to private equity, private infrastructure, alternative assets (hedge funds) and a lift in weighting to cash – apparently during COIVID.
The failure to target yield over the last 6 months of FY20, as markets dislocated, will work against this fund going forward. The lack of quality direct property will also be an issue.
The Fund claimed a positive return in the year to June but the movement in total asset values suggests a negative return after costs.
Our thoughts on the Future Fund are these.
First, the Fund is now being affected by diseconomies of scale as opportunities (for instance direct property and small growth companies) that are presented to SMSFs are not viable for it. There is an unfair advantage for SMSFs given their size and this is not commonly understood.
Second, the Fund is aggressively positioned offshore and this is now questionable given the repercussions of the COIVID crisis on both European and emerging economies (ex-China). A balanced weight to offshore equities mainly US is (on our opinion) highly desirable.
Finally, with interest rates nearing zero and with abundant demand for Australian bonds at a blend yield of about 1% going out to 30 years, it is surely time for the Commonwealth to borrow $50 billion, inject same into the Future Fund, close the liability for taxpayers and force this Fund to service pensions.
Whilst we agree that the Future Fund is appropriately spread across assets, we do suspect that it is excessively overweight illiquid assets (infrastructure and private equity) because it is not servicing pensions. Also, the investment in alternative assets to generate returns in a volatile period (like COIVID) seemingly hasn’t worked.