How to finance the net-zero transition in emerging markets

Emerging markets (EMs) are essential to the transition, but they are starved of capital to fund it. A big emerging question: how can EMs get the investment they need for the net-zero transition?

Reaching the globally agreed climate goals requires speed – notably a 50% reduction in emissions by 2030, according to the UN. Emerging markets account for an increasingly large share of global emissions – now 34%, or 65% including China. The choices these nations make as they build out their infrastructure will shape climate risk for all. But they are not able to meet their investment needs alone, and there is insufficient cross-border public/private finance filling the gap. It is a matter of urgency that we address the massive climate financing shortfall, in our view.

As a global asset manager and fiduciary to our clients, we know that many asset owners want to be part of the transition. Here’s how we see the solution:

$150 billion investment in decarbonization in EMs in 2020 - only a sixth of what's needed.

We estimate EMs will need at least $1 trillion per year to achieve net-zero emissions by 2050. Current investment falls far short.

$100 billion of public budgetary resources annually - what we think is needed to leverage $1 trillion.

Annual budgetary resources of $100 billion over 20 years would be only a fraction of the amount spent cushioning the Covid-19 impact and would avoid global damages of at least 10 times that if no action is taken.

How much will a successful green transition in EMs cost? Massive investment is needed to decarbonize every sector of the economy. We believe this could come at a cost of at least $1 trillion per year. We exclude China from our estimate – given its greater capacity to finance its own journey to net zero and contribute to the global effort. 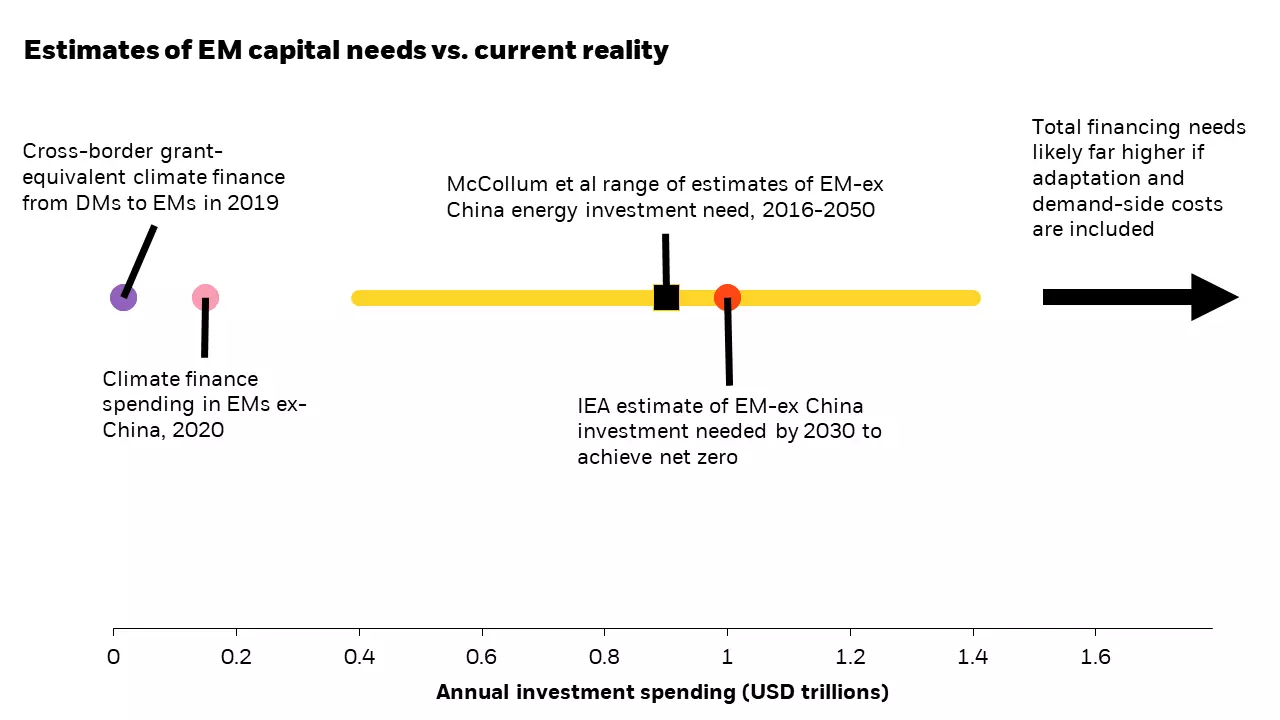 A decade late, a trillion short

This $1 trillion figure is based on numerous studies of climate finance needs in EMs. Estimates vary depending on the underlying assumptions and given the uncertainties around modelling climate impacts. A 2018 study puts the investment requirement for EMs excluding China at between $0.4 trillion and $1.4 trillion per year, while a June 2021 report from the International Energy Agency (IEA), World Bank and World Economic Forum states that over $1 trillion per year will need to be invested in EMs through 2030 to get them tracking towards net-zero emissions by 2050.

Yet these estimates largely focus on the supply-side cost of climate mitigation – that is, the measures to tackle the process of climate change. If we also consider the cost of adaptation (measures to protect against and limit the damage of realized and future climate change) and demand-side costs (such as reducing energy consumption), the figure would be significantly higher.

How big is the shortfall?

Even taking a conservative view of the investment need, current financing is nowhere near sufficient. In 2020, investment in decarbonization in EMs (excluding China) amounted to just $150 billion per year – only a sixth of what’s needed. See the chart above.

Some of this money comes from EMs themselves, and some is mobilized by DMs via official bilateral and multilateral channels and the private money they leverage. In 2019, DMs mobilized just $80 billion, according to the latest OECD data. This puts DMs still some way off from meeting their commitment as part of the 2010 UN Framework Convention on Climate Change (UNFCC). Their goal is to mobilize, from both public and private sources, at least $100 billion per year by 2020. Even meeting this pledge won’t get us anywhere close to the at least $1 trillion we believe is needed.

Breaking down the 2019 DM mobilization total, the vast majority of it (over 80%) was public money, and the overall volume has grown somewhat in recent years, largely delivered in the form of loans. Only a small share of this public money – $16.7 billion in 2019 – was actually grant-equivalent financing fueled by budgetary resources. This type of financing is crucial because it can be used to directly buy down EM risk and green technology premia.

Private money mobilized by DMs declined slightly in 2019 versus 2018 – from an already low level. In 2019 less than 20% - or $14 billion – came from private sources. But the investment needs of at least $1 trillion per year are too high to be met by taxpayers alone. The private component needs to be massively scaled up – and rapidly, in our view, given the potential consequences of an underfunded green transition in EMs for the whole world.

Distribution of resources and assets in emerging and high-income economies 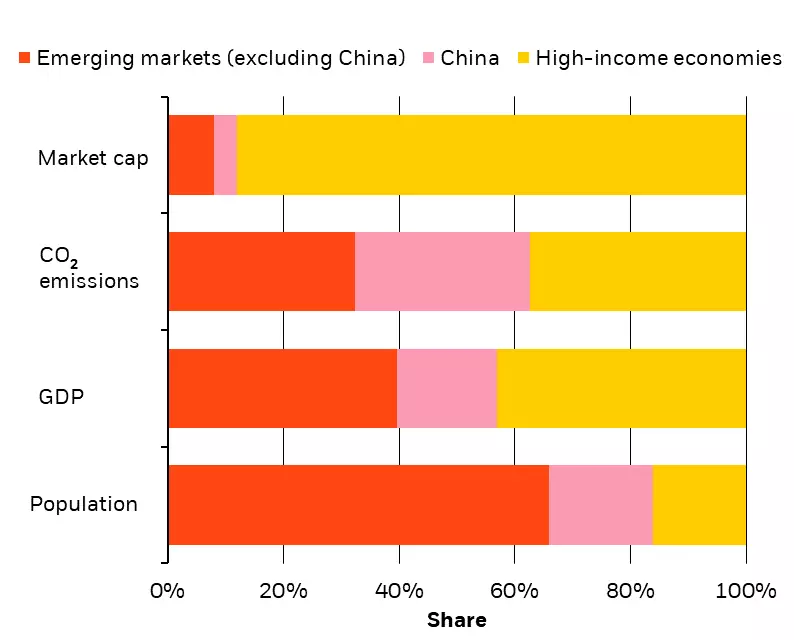 Private capital to fund the transition is theoretically plentiful. But current strategies to entice it are not working at sufficient scale and speed. Why not?

The EM investment landscape is viewed as high risk – to the point that many private investors are deterred – or prohibited – from investing in EMs. See the chart above.

But these are currently undiversifiable risks: the institutional and structural reforms required to de-risk individual countries – though underway in many cases – will not happen quickly enough. No amount of clever financial engineering can address these risks, and existing approaches by multilateral organizations have not succeeded in mobilizing private capital at scale.

Existing measures to mitigate this risk have not been effective in bringing in private finance at the scale needed.

Existing grants or grant-equivalent finance provided by developed economies is too targeted on funding individual projects – rather than being used to mitigate risks more broadly and crowd in private investment. If the pace and scale of climate flows is to pick up as it needs to, either the input of public budgetary resources needs to increase radically, or the amount of private capital that public support can mobilize will have to rise by an order of magnitude – or a combination of the two.

Governments that can afford to provide support need to ramp up public support and put some of that capital at risk, in our view. This is the only way to mobilize private capital at the scale and pace needed, in our view. See the chart. 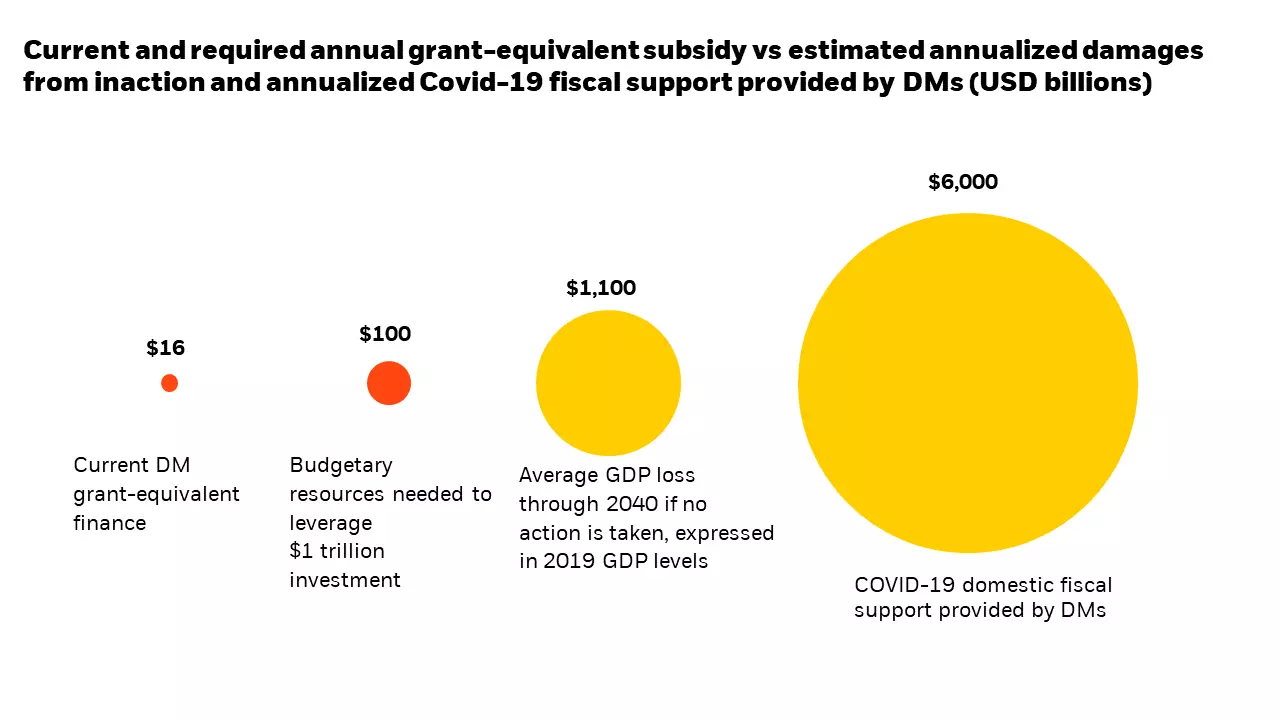 Forward-looking estimates may not come to pass. Sources: BlackRock Investment Institute, OECD, IMF. Note: Circles show the estimates of the average annual spending needs, economic damages or actual spending on a range of items. Current DM grant-equivalent finance is taken from the OECD’s latest assessment of DM climate finance flows to EMs. The budgetary resources needed to leverage $1 trillion investment is our estimate of what’s needed to mobilize private sector finance so EMs can fully fund their green transition. The loss in global output is based on previous work estimating the global damages avoided through 2040 in a green transition vs business as usual, expressed in 2019 GDP levels with the total annual loss spread evenly over 20 years. The estimate of Covid-related fiscal support is derived from IMF estimates of the discretionary fiscal support measures introduced by DMs to address the domestic impact of the Covid-19 pandemic from 2020 to mid-2021. The average annual cost is derived by assuming that two-thirds of support was delivered in 2020.

We believe budgetary resources of at least $100bn a year – about six times current outlays – need to be committed by countries that can afford it.

The amount could be reduced if development finance institutions(DFIs) can mobilize more private capital with each dollar of public support than they currently do. But given the timescale and DFIs’ difficulty in mobilizing private capital at scale, we believe the starting point is for governments to significantly scale up budgetary allocations.

This money should be used to de-risk projects on the understanding that it might not be seen again, rather than be spent directly on projects looking for a return. This may be seen as a huge cost for DMs, but we believe it represents an essential investment. $100 billion per year – or $2 trillion cumulatively over the next 20 years – is only a fraction of the losses averted by a successful climate transition. We estimate a cumulative loss in global economic output of nearly 25% to 2040 – equivalent to more than $21 trillion of 2019 GDP. Once we move past 2040, we expect the size of avoided economic damages for actions taken now to be substantially higher.

To further put this figure in context, $100 billion per year over 20 years is only a fraction of the $9 trillion (as at July 2, 2021) of domestic DM fiscal support provided since 2020 to cushion the impact of the Covid-19 pandemic. Applying the same willingness to roll out material support for climate finance could help close the funding gap in time.

Significant de-risking lies at the heart of any solution to mobilize private capital – and there is no way to do this without massively scaling up direct budgetary resources, in our view. In practice, mobilization could come through a number of mechanisms - and we see a number of key design features of measures that we believe will help unleash private finance at scale.

Public budgetary resources can play a critical role in de-risking investment opportunities.  Many of the undiversifiable risks such as country risk, could be reduced via this type of public finance – potentially unlocking substantial pools of private finance currently prevented from being invested in EMs generally.

But some changes are needed to the current system in order to achieve this – for example increasing grant-equivalent funding for first loss arrangements – in which the development or public finance institution agrees to take on part of the risks of an investment, including being the first to take on losses in the event of default.

Budgetary resources have greatest power to scale up this de-risking by providing finance at a facility level, rather than on a project-by-project basis. This could happen in several ways, for instance by using public funding as seed capital to set up a green investment bank in an EM economy, or to fund a mechanism such as an auctioned carbon price floor which can issue an investment instrument that is bankable and which supports decarbonization without investors taking on project completion risk.

A system that meets these key requirements can help ensure that the catalytic promise of significantly higher public budgetary resources can be realized, to ultimately deliver funding on the scale and at the pace needed to fund the green transition.

The examples discussed above provide some illustrations of how this could happen. In practice, a combination of measures will be needed. We have focused on measures that can be scaled up to deliver quickly, but maximizing impact per dollar spent will require significant changes to existing multilateral and bilateral delivery channels. It may even entail a complete overhaul of current institutions or the creation of new ones. That’s for governments to determine, but in any event, action needs to be taken without delay.

We want to help you achieve your investment goals and believe that the best way to do that is to offer a selection of actively managed multi-asset portfolios.

Building our portfolios with iShares ETFs means that investors can gain the potential benefits of asset allocation with underlying investments that closely follow an index.

Our model portfolios are constructed to optimally balance long–term returns, risks, and costs as per the objective of the four risk profiles. As a result, each portfolio has a unique objective, offering exposures to various asset classes, industry sectors, style factors, currencies, and geographies.

Our model portfolios are constructed and supported by a global team of investment strategists and monitored by BlackRock’s sophisticated risk-management engine, Aladdin – the same technology used by some of the most sophisticated investors and institutions around the world.

The portfolio asset allocations are reviewed regularly and rebalanced where appropriate, as per the objective of each model. This is to ensure that the portfolios remain optimally balanced for risk, return, and cost.

*As of June 30, 2021, the firm managed approximately USD$9.5 trillion in assets on behalf of investors worldwide.