The "inescapable truths" one year on: what's changed?

0 11
A year ago we identified the disruptive and economic forces that we thought would shape the decade ahead for investors. These were our "inescapable truths". But do they still hold true?

Last year we launched our "Inescapable investment truths for the decade ahead". They comprised a number of economic forces and disruptive factors we thought would shape the investment landscape ahead of us, as well as a guide to how investors might respond.

The original article is available here.

Here, one year on, we provide a brief update in response to recent events, particularly the turn in global monetary policy.

The Inescapable truths describe an outlook for the world economy of subdued growth and low inflation against a backdrop of disruption from populist politics, technology and climate change. We predicted real interest rates to be low, and that investors would struggle to meet their goals from market beta alone as stock market index returns are likely to be held back by the macroeconomic backdrop.

An important feature of this outlook is that we expected the supportive tailwind from falling bond yields to fade. This would leave equity markets more dependent on earnings growth, rather than the positive effect of falling bond yields on valuations, for return. Consequently, investors will have to be more discerning in identifying pockets of growth and in navigating the impact of disruptive forces on traditional business models. We described this as a shift "from macro to micro". One year on, we believe these views remain intact.

The return of the macro tailwind?

The US Federal Reserve (Fed) pivoted on monetary policy in 2019 from tightening to easing and other central banks have followed suit. Interest rates have been cut and the Fed also announced the end of its programme of quantitative tightening (QT). Elsewhere, the European Central Bank (ECB) has cut rates and relaunched its asset purchase programme (QE), whilst rates have been cut in China. Even the Bank of England has moderated its hawkish tone and is considering a rate cut.

In response, bond yields have fallen sharply and equity markets have benefitted once more from the tailwind of re-rating. Within equity markets, the interest rate sensitive bond proxies have outperformed as investors have searched for yield. Once again macro factors have trumped micro in driving performance.

The return of the macro tailwind has certainly been a key feature of 2019 and could be seen as a challenge to our macro-to-micro thesis. But it is only part of the story of the past 12 months, as it omits the severe de-rating seen in the fourth quarter of 2018.

Essentially, we have had a weaker equity market over the past 12 months which has seen a severe de-rating (fall in price-earnings ratio) followed by a near equivalent re-rating. At the same time, earnings per share have remained roughly level (see the chart below). 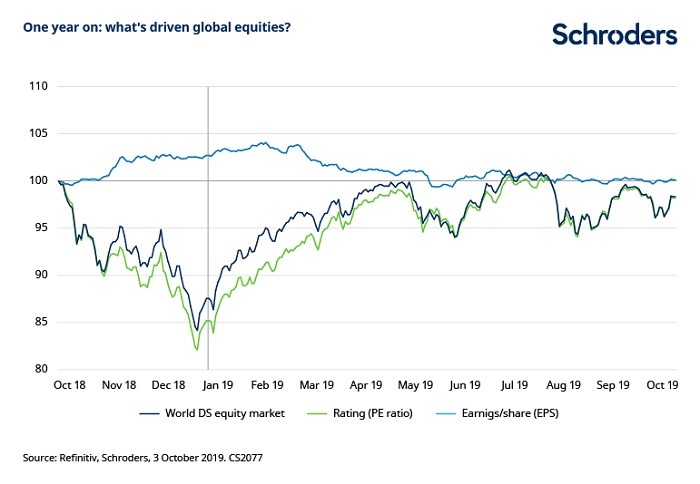 On a one-year view, global equity market performance is more in line with the spirit of the Inescapable truths than the calendar year figures would suggest.

Furthermore, we would argue that the headwinds we identified a year ago have underpinned the Fed's decision to change tack. Underlying growth is simply not strong enough to withstand external shocks such as trade wars without risking a dip into recession.

We see the dispute between the US and China as part of the geopolitical disruption investors will have to live with in the future and the Fed has had to respond. In this respect, the pressure from populism on markets has increased. No doubt we will see more headlines in 2020 as the US presidential election race gets underway, with many Democrat party candidates shifting to the left to counter Trump with policies on regulation and tax. More immediately, the UK is likely to see an election fight between two populists - Boris Johnson and Jeremy Corbyn - before the end of the year.

Investors have also seen a noticeable increase in pressure from climate change. Widespread protest around the world has focused attention on government action (or lack of it) to mitigate the worst effects of global warming. The number of climate-related proposals at shareholder meetings has increased and will continue to rise as more investors adopt environmental guidelines.

Coming back to our macro-to-micro theme: the question remains as to whether central banks can continue to drive markets from here.

The loose policy stance will certainly remain for the time being. This will keep liquidity abundant. For example, there is scope for, and we expect, more rate cuts from the Fed. However, it is debatable as to how far this will go in pushing equity PE ratios higher given that the markets are already discounting significant further easing.

As for the ECB, departing President Mario Draghi has made it clear that he has done all he can on monetary policy and that he would now expect governments to make greater use of fiscal policy to support growth. China has scope to cut rates further. However, in Japan, policy probably reached its limits some time ago as the Bank of Japan's quantitative easing programme has already extended into areas such as equity and REITs, which have so far proved off limits to others.

There is, of course, a further step that central banks could take to boost activity. Modern Monetary Theory (MMT) argues that rather than printing money to buy financial assets, central banks should create money to directly fund public expenditure or tax cuts. Some have called this "People's QE", economists know it as a "helicopter drop". Either way, it would inject cash directly into the economy and would undoubtedly boost activity, particularly inflation.

In this respect, though, MMT would drive bond yields higher (as inflation expectations soared) and hence would cause a de-rating rather than re-rating of stock markets. Central banks would be a headwind rather than tailwind for markets as bond yields rose and valuations fell. Within equity markets, though, there would be a major rotation from the bond proxies to the value and cyclical stocks.

From the perspective of the Inescapable truths one year on, this suggests that our original "from macro to micro" view still holds as monetary policy approaches its limits. However, the fact that policies such as MMT are even being discussed suggests that the disruption from politics has further to run as populists turn their ire on central banks.

This is an article originally written by Charles Prideaux, Global Head of Investment and Keith Wade, Chief Economist & Strategist at Schroders.