0 9
Stock markets have tumbled in the midst of the coronavirus outbreak. Schroders’ analysis shows how the biggest one-day falls in the past have been followed by substantial returns over the subsequent five years.
Coronavirus concerns have swept through financial markets. Globally, stocks have endured some of their worst performances since the days of the financial crisis.
For instance, the US stock market, as measured by the S&P 500, fell 7.6% in one day on 9 March 2020, its fifth-worst trading day since 1988.
On the same day, Australian stocks, as measured by the S&P/ASX 200 Share Index, fell sharply. It dropped 7.4%.
What next?
It is impossible to predict what may happen next. The severity of the disease and its long-term economic impacts are still yet to be seen.
However, while the stock market has been quick to react, history shows it has a tendency to bounce back strongly over time.
How the stock market bounces back
Using the US stock market as an example, the past three decades show the strongest five-year rebound in the US brought a return of 164%. That is an annualised return of 21% in the five years after a 6.7% fall for the S&P on 20 November 2008.
That date was during a particularly gloomy phase of the 2008-09 financial crisis.
Given the abject mood at the time, investors may have struggled to believe that an investment of $10,000 made in the market at the start of that turbulent day would have grown to $26,400 within five years, before charges.
Of course, past performance is not guaranteed to be repeated in the future. The returns are illustrative and do not include any costs or fees. But the data underlines the historic resilience of shares over longer timeframes, even following shocks. 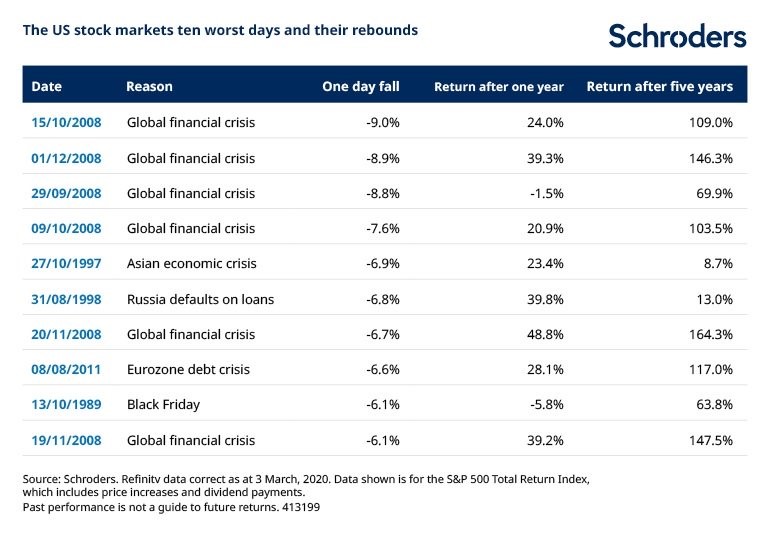 A short history of the stock market’s worst days
As the table above shows, the pattern is repeated on many other of the ten worst one-day crashes.
Falls associated with the global financial crisis, including the eurozone debt crisis, account for seven of the ten worst days the US stock market has endured since 1989.
The most severe was a 9.0% fall on 15 October 2008. This was followed by a five-year return of 109%, or an annual equivalent of 15.9%.
The credit crisis escalated into a full-blown financial crisis in 2008 with the collapse of the investment bank Bear Stearns and worsened with the failure of Lehman Brothers in September of that year. This created a domino-effect among banks and insurers. Forced mergers and government bailouts were required to stabilise markets.
Such crisis moments attract contrarian investors, such as the feted investor Warren Buffett who invested $5 billion in Goldman Sachs in September 2008.
And the worst of the rest
The stock market falls during the post-dotcom 2000 to 2003 slump did not make the top ten. A 5.8% fall on 14 April 2000 was the 12th worst. It was followed by a 7.4% loss five years later.
The data doesn't stretch back to Black Monday in October 1987 when US stocks fell 22% in a day, their biggest ever one-day fall.
The strongest Australian market rebound
Similar data was collated by Schroders for the Australian equity market going back to June 1, 1992, using data for the All Ordinaries Index. The strongest recovery from the ten worst days was a 112% five-year gain following the September 11, 2001, terrorist attacks on New York.
Overall, the average recovery from the ten worst days in Australian markets over the following 5 years was a 67% return.
Again, like the S&P 500, the Australian stock market has provided healthy returns, providing you can stomach the ups and downs over the last three decades.
The value of investments and the income from them may go down as well as up and investors may not get back the amounts originally invested.
This is an article originally written by David Brett, Investment Writer at Schroders.

Important Information:
This material has been issued by Schroder Investment Management Australia Limited (ABN 22 000 443 274, AFSL 226473) (Schroders) for information purposes only. It is intended solely for professional investors and financial advisers and is not suitable for distribution to retail clients. The views and opinions contained herein are those of the authors as at the date of publication and are subject to change due to market and other conditions. Such views and opinions may not necessarily represent those expressed or reflected in other Schroders communications, strategies or funds. The information contained is general information only and does not take into account your objectives, financial situation or needs. Schroders does not give any warranty as to the accuracy, reliability or completeness of information which is contained in this material. Except insofar as liability under any statute cannot be excluded, Schroders and its directors, employees, consultants or any company in the Schroders Group do not accept any liability (whether arising in contract, in tort or negligence or otherwise) for any error or omission in this material or for any resulting loss or damage (whether direct, indirect, consequential or otherwise) suffered by the recipient of this material or any other person. This material is not intended to provide, and should not be relied on for, accounting, legal or tax advice. Any references to securities, sectors, regions and/or countries are for illustrative purposes only. You should note that past performance is not a reliable indicator of future performance. Schroders may record and monitor telephone calls for security, training and compliance purposes.