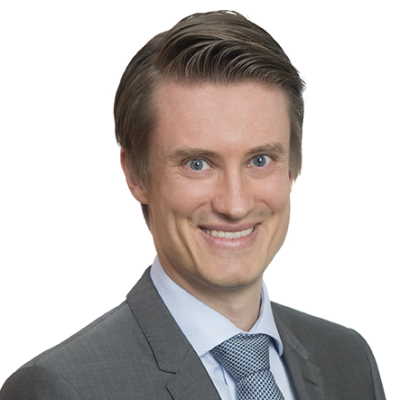 Sebastian Mullins
Schroders Deputy Head of Multi-Asset, Australia
0 16
While economic data has improved, our analysis indicates that, in the medium term, the probability of a recession is on the rise. This coupled with stretched equity valuations leads us to recommend caution until further improvements are observed.

For all the articles on yield curve inversion in March, there was little fanfare in the press when the curve managed to steepen back into positive territory in April. Perhaps we didn’t need to be told as market performance reacted accordingly, with risk assets continuing their advance during the month while bonds took a breather. While hovering a mere 10bps above inversion (as measured by US 10-year bond yield minus the 3-month bill rate) is hardly a comfortable margin of safety, it does help elevate some of the recession rhetoric until more economic data is released.

Typical inversions before a recession tend to be measured in months, not days. The yield curve remained inverted for at least six to 12 consecutive months prior to past recessions, whereas the most recent inversion lasted a week. The magnitude of the inversion is also a determining factor, with the maximum inversion over 50bps in early 2007 and almost 1% at the start of 2001 making the most recent 5bp inversion seem paltry. There is also the choice of yield curve. The US 10-year bond yield minus the 2-year bond yield inverted ahead of the 10yr-3m curve in the past two recessions, but has remained positive (and improving) throughout 2019.

However, this doesn’t mean recession risks should be ignored altogether. The Fed’s near-term forward spread, which was proposed in June 2018 as a more accurate predictor of recessions, has remained negative since the start of March. Components of our Receiver Operation Characteristic (ROC) Recession Model are starting to flash red, however continue to cluster to indicators that lead a recession by 12-24 months. We therefore still believe the probability of a recession is rising, but more a 2020 story or beyond.

Now this does not mean that it is time to reach blindly for risk. An economic recession and a profit recession can differ in timing and magnitude, along with the severity of the market’s reaction. Increasing wage pressure and lack of price inflation is expected to lead to a margin squeeze for US corporates. With US equities making a new high at the end of April, we need to see continued earnings growth to alleviate this fear and justify the recent rally. Analysts have been cutting US earnings forecasts YTD and downgrading 2019 EPS. Early results for the current US earnings season show earnings are currently above forecasts, but this is usually the case as companies successfully manage expectations and is probably not enough to trigger significant upgrades. Our earnings revision momentum model remains a negative outlook supporting this concern, however this measure looks to be rebounding from very low levels, at the end of Feb, potentially indicating that revisions may be bottoming.

To help boost demand and extend the cycle, we need to see rate cuts from the Fed or a boost in global growth. While the recent Fed pause was taken positively, until the Fed cuts, a pause can still be viewed as restrictive policy, especially if growth continues to weaken, dragging down the neutral rate with it. Global growth on the other hand is starting to show some signs of life. The Chinese economy appeared to be stabilising sooner than expected in April, with GDP coming in at 6.4% year-on-year (YoY). M2 credit growth rebounded to 8.6% YoY and total social financing bounced to 10.7%, which could help boost global growth in the second half of the year. However, most gains in credit growth appeared to come from regional banks lending to local governments, which some have chastised as a cover to help avoid defaults on local government financing vehicles as opposed to a new boost in infrastructure. Another positive note has been the strong rebound in German auto sales, as the backlog from the emissions scandal starts to clear. Whether this is enough to boost Eurozone growth, particularly given the potential for a new EU-US trade war, remains to be seen.

Therefore, we believe we are at a crossroad where global economic headwinds may turn into temporary tailwinds, but stretched equity valuations and the potential for a recession on the horizon lead us to remain cautious until further improvements are observed. We believe that until global growth or business sentiment improves, markets may face another bout of volatility, as the tension between high equity valuations and the potential for murky or disappointing data plays out. Rather than taking a strong directional view, we remain conservatively positioned across our models, but continue look for opportunities to participate in any further rally in risk assets.

Opinions, estimates and projections in this article constitute the current judgement of the author as of the date of this article.  They do not necessarily reflect the opinions of Schroder Investment Management Australia Limited, ABN 22 000 443 274, AFS Licence 226473 ("Schroders") or any member of the Schroders Group and are subject to change without notice. In preparing this document, we have relied upon and assumed, without independent verification, the accuracy and completeness of all information available from public sources or which was otherwise reviewed by us.

Schroders does not give any warranty as to the accuracy, reliability or completeness of information which is contained in this article. Except insofar as liability under any statute cannot be excluded, Schroders and its directors, employees, consultants or any company in the Schroders Group do not accept any liability (whether arising in contract, in tort or negligence or otherwise) for any error or omission in this article or for any resulting loss or damage (whether direct, indirect, consequential or otherwise) suffered by the recipient of this article or any other person.This document does not contain, and should not be relied on as containing any investment, accounting, legal or tax advice. You should note that past performance is not a reliable indicator of future performance.